LIBS spectra are immensely complicated involving transient plasma physics, shockwave dynamics, high temperature chemistry and atomic emission. The approach we have taken to produce the indicative spectra for each element do not come close to covering all of these effects. The hope is, however, that sufficient has been taken into account that elements can be identified from their indicative spectra

The reason that the indicative spectra are there at all comes from my experiences when starting out in LIBS - it was extremely difficult to identify many of the elements from their spectra.

Take Aluminium for example: - A little experience shows that one is unlikely to see more than a single ionisation. So, putting Al i-ii into NIST gives 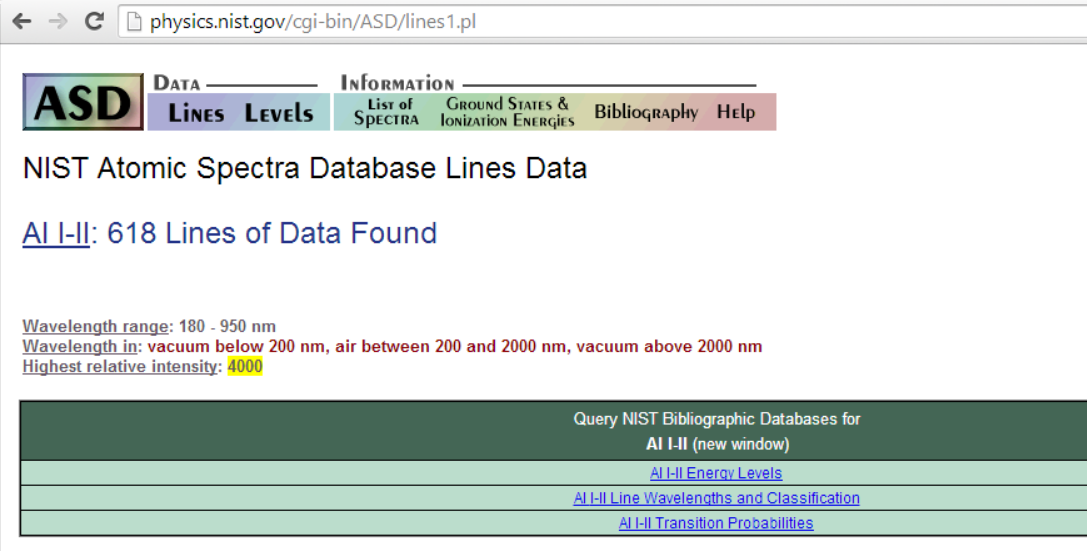 Even limiting things to just Al I, shows the highest relative intensity peaks as

Why would one pay any attention to these peaks? [which are typically the brightest Al peaks in any LIBS spectra!]

The peak intensities come from 2 main equations. The first of these describes the intensity of a peak in a LIBS (or other atomic emission spectrum where self absorption can be neglected) and is given by
$$ \begin{aligned} I=a C \frac{g_{k} A_{ki}}{U(T)} e^{- \frac{E_{k}}{kT}} \end{aligned} $$
where $$ \begin{aligned} I &=Intensity \\ c &=Concentration \\ a &=scaling \quad factor \\ T &=temperature \\ U(T) &= partition\quad function \\ A &= Einstein\quad Coefficient \\ g_{i} &= Upper\quad level \ quad degeneracy \\ E_{ij} &= Upper\quad level \quad energy \\ k &=Boltzmann's \quad constant \\ \end{aligned} $$
However, this only describes the instantaneous intensity. In a LIBS plasma, the temperature is changing - hence the peak intensity is constantly changing. To add to the complexity, what is recorded as the spectrum is the integration of this intensity over the integration time/gate width of the detector. A typical LIBS plasma lasts 100us, but the integration time of the Sony ILX554B CCD (commonly used in Ocean Optics/Avantes based spectrometers) is as long as 1ms.

Looking at the different parts of the Intensity equation above for a couple of elements shows some of the complexities involved.

Firstly, the intensity due to the population of the energy levels, which shows a steady increase with temperature. Different elements have different intensities due to the higher values of $ E_{k} $ in O and N, compared to Ca and K. 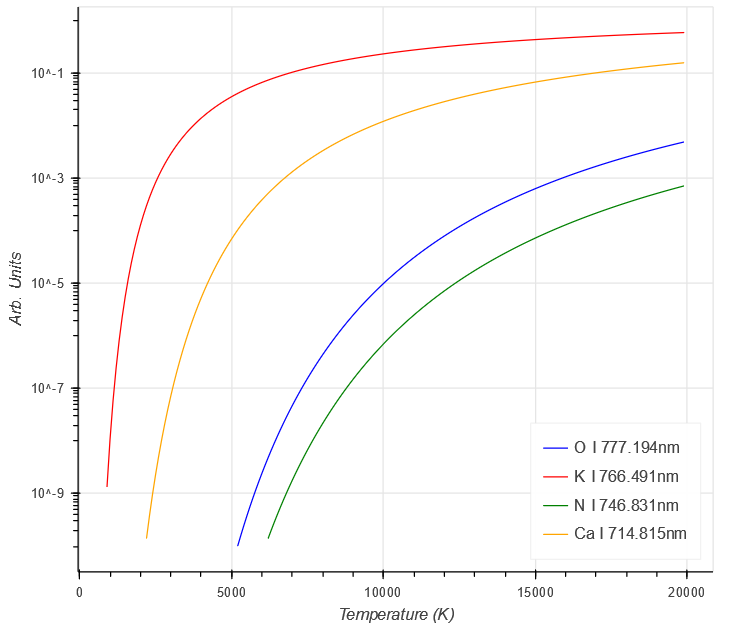 Next, the partition function also shows a steady increase with temperature. [Note this is in the denominator of the peak intensity equation] 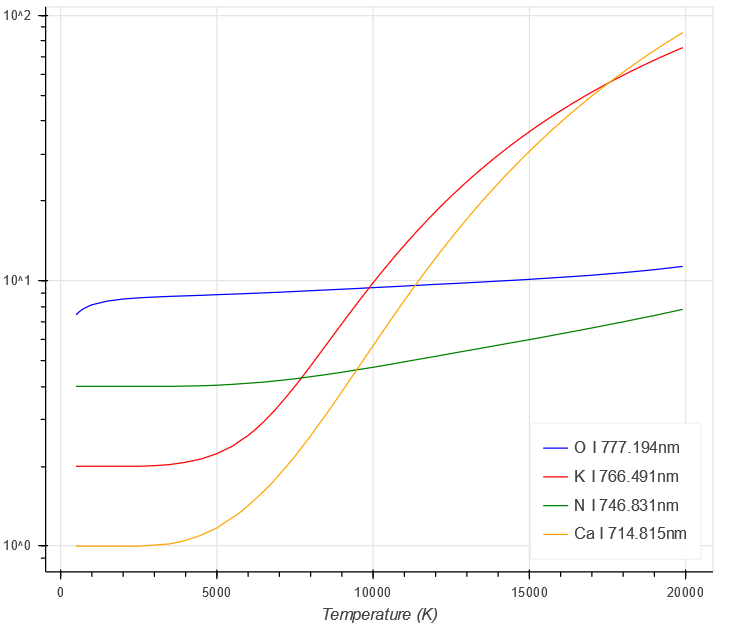 With increasing temperature, a greater fraction of the element is ionised, hence the fraction in the neutral decreases. 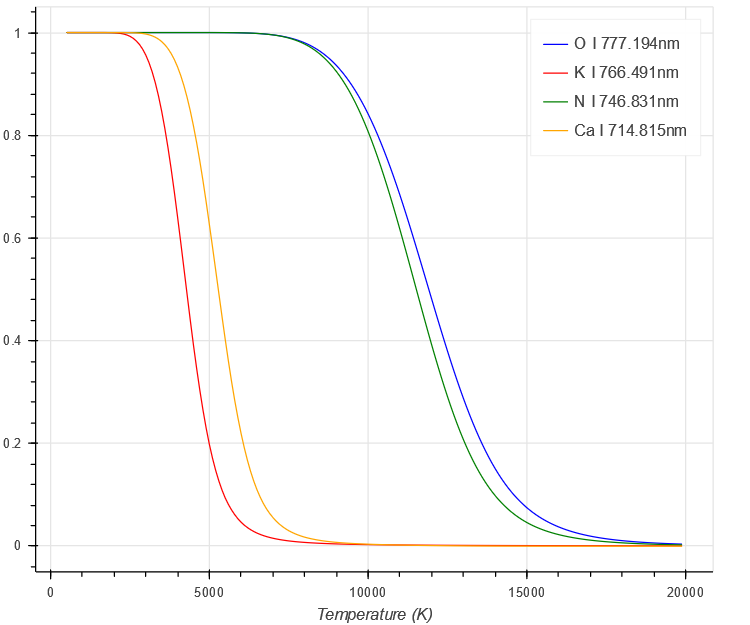 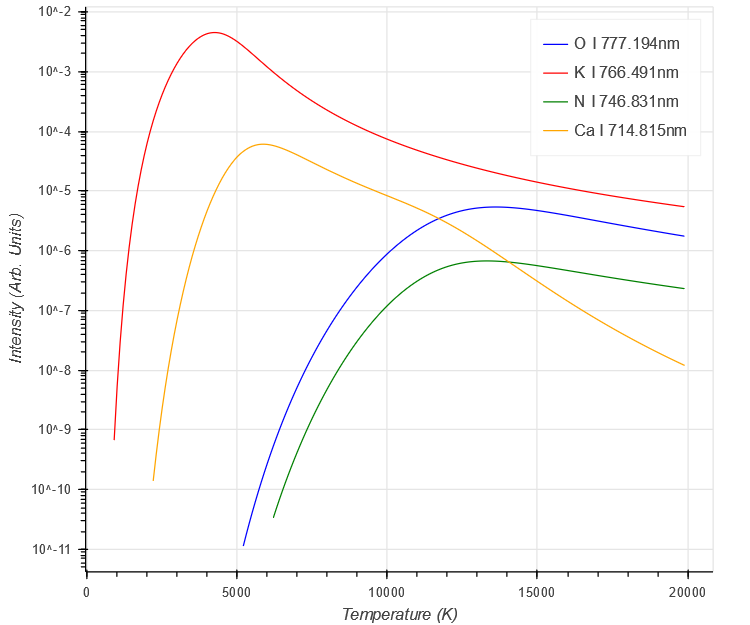 The Intensity(long) has an integration time ($ t_f $) of 100 microsecond, and is more representative of the spectra from an Ocean Optics or Avantes spectrometer based system. 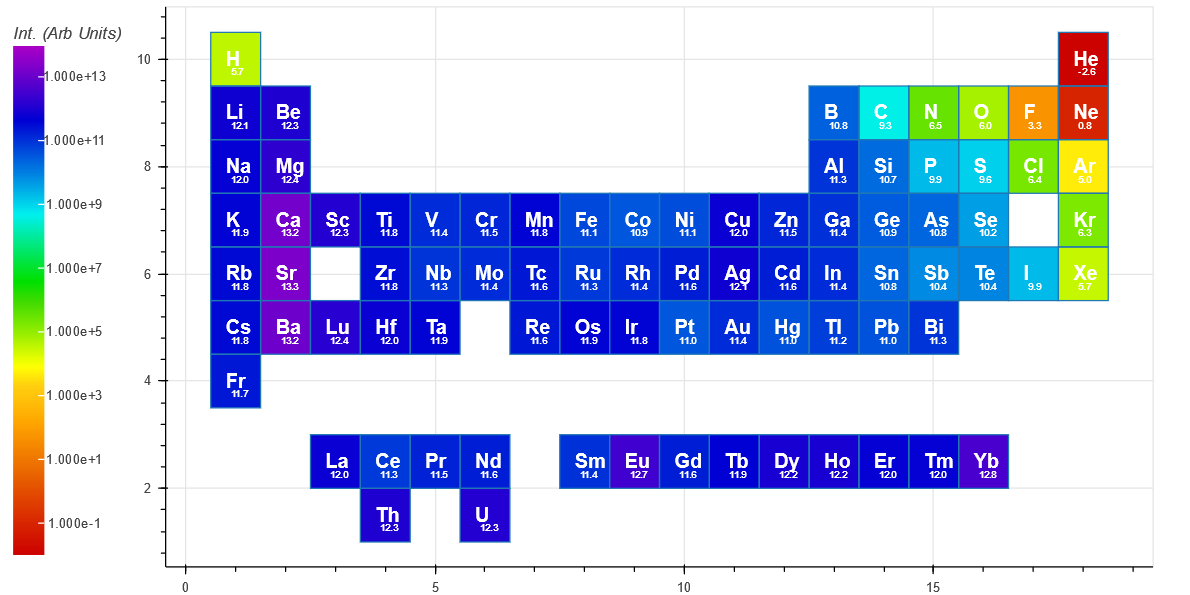 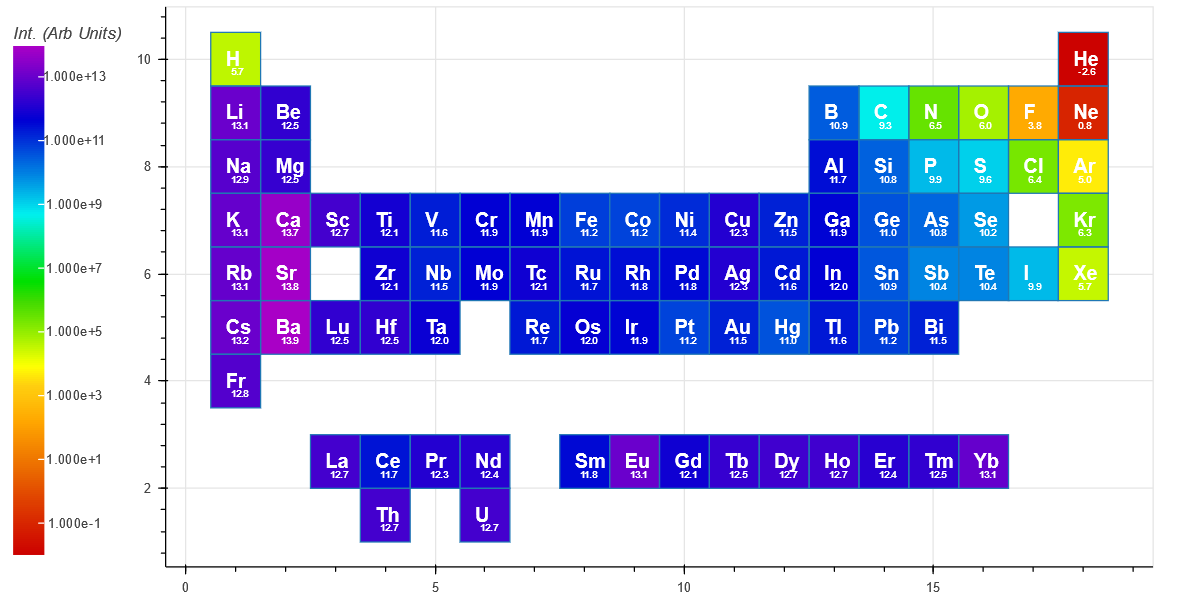