Tutorial 1: Introduction to the Basics¶

Laser Induced Breakdown Spectroscopy (from here on referred to by the common acronym, LIBS) is a powerful tool for the chemical analysis of solid, liquid and gas samples. In this, and the following documents, we will explore the technique.

This first tutorial establishes some of the key equations and concepts that we will use throughout the rest of the series. If formula derivations are not your interest you can skip to the next section

As is described elsewhere, all LIBS analysis is based on the following equation:

Collecting together constants (to simplify things a little)

where C is the concentration of the element in the sample.

Under many circumstances (we will return to this statement later), we can ignore all but the first term in the expansion to give us the 'LIBS Equation'

(where additional brackets have been added to group the terms).

Things to notice, the intensity of a peak in the LIBS spectra is:-

As can be seen from the 'LIBS Equation', determining the concentration of an element by measuring the intensity of peak only 'works' if everything after the concentration term remains constant across all the samples. Most LIBS experiments involve focussing a laser of fixed energy onto the sample, hence, the enery into the system is roughly constant. From the laser, the light:-

with the energy 'left over' going to heat the plasma (that is, the T in the LIBS equation).

If any stage has significant variation:-

a) dirt on the optics, jitter in the laser energy, changes in beam cross shape

b) dust on the lens or between the lens and the sample (for example, material ejected during the previous analysis laser pulse)

c) different absorption of laser energy due to sample colour or transparency, different energy required to melt/boil sample (this last one is sometimes called 'matrix effects')

then the energy available to heat the plasma is different and the variation in the other terms is greater than due to the concentration and no chemical analysis is possible - given how sensitive the LIBS Equation is to the Temperature, it is sometimes a wonder that LIBS works as well as it does!!!!

There are a number websites that will show the LIBS Spectra for a particular element. These all utilise some variant of the LIBS Equation above, with a database backend. 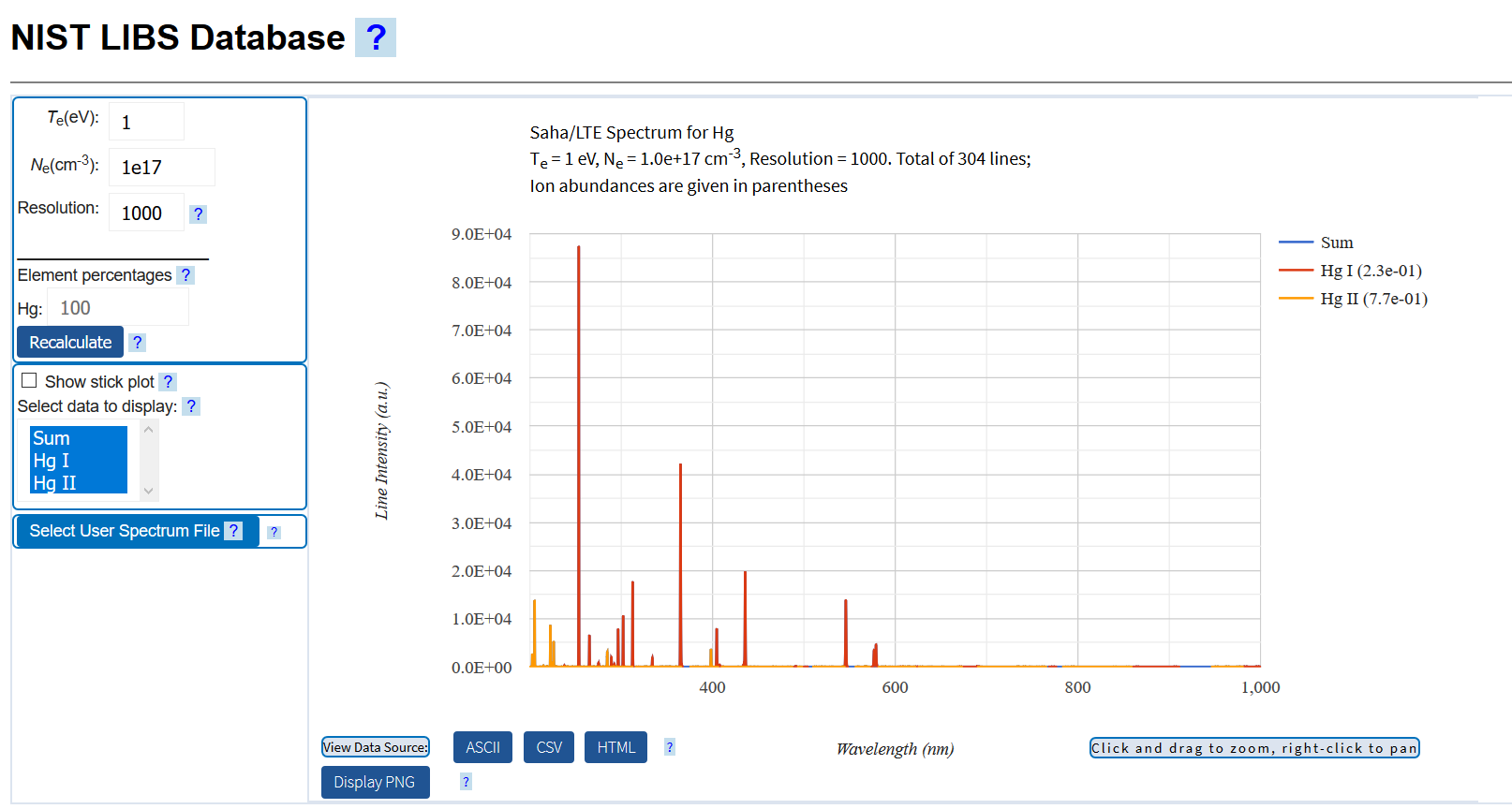 Here the spectra for a liquid, Mercury.

In the examples above, the spectra have become increasingly complex across the transition from gas to liquid to solid. However, this comes from the additional energy levels available from the increasingly larger atoms - the spectra of solid/frozen oxygen looks the same as the gas one.

Each Element has a unique spectra. This enables a skilled LIBS user to look at a spectra and state which elements are present in the sample.

In the next couple of Tutorials we will explore the basics of LIBS analysis using some common tools. The first one being a spreadsheet